Extra Life Home
What is Extra Life?
How it works
How it helps kids
Rally your company
Support & Resources
FAQs

By participating in Extra Life for Boston Children’s Hospital, you are supporting our Every Child Fund, which fuels promising research and funds vital family services not covered by insurance. Every penny you raise goes directly to helping kids. Just as you intended. Learn more. 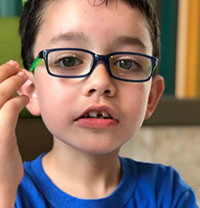 "The main reason I signed up for Extra Life is because of my son, Jacob. The little boy he is now is such a different child to who he was in early 2016. I don't know that we could have gotten him safely along without the loving care of Boston Children's Hospital.

Early 2016 was a strange time for our family because our formerly cheerful and sweet boy had suddenly turned anything but. Outbursts were a daily thing in our home, some of them violent, some of them deeply scary. The pain he must have felt is beyond what I can imagine, and left him banging his head and lashing out as those he very truly loved. This was not how he wanted to be, or how anyone would ever want to be, but as his mom I had no idea who to call or what to do.

I did not even think twice when I climbed into the ambulance with him. I asked for Boston Children's Hospital. I knew they could help, and they did.

A day came where he had such violent episodes that I called 911. There was no way his father and I could safely transport him on our own to an emergency room. We needed help. I did not even think twice when I climbed into the ambulance with him. I asked for Boston Children's Hospital. I knew they could help, and they did.

Mental health issues and mental illness, especially in children, is something that is danced around and shied away from. It is a topic that needs to be discussed. When we got to Boston Children's, we were received with respect and care. They wanted to see my son safely looked after too. They prepared us for the worst while working for the best. Jacob spent two weeks in a pediatric psychiatric unit specializing in working with children with cognitive disorders like autism. He was diagnosed with a co-morbid condition called disruptive mood dysregulation disorder (DMDD). Treatment began and continued when he came home. It was like seeing my son anew all over again. His smile returned. His loving nature shone like a star. He found his words again and has had so much to tell us since. He found the bond with his service poodle Blossom and realized how unbreakable it is. He is happy, gregarious, challenging, and most of all, content in his own skin.

Where we would be today if Boston Children's ER staff had not cared, had not been so thorough and patient with us, I have no idea. There aren't enough words to express the gratitude I have for the help we received. I'm looking forward to fundraising over the next year to help hospitals like this continue to help families like mine and kids like Jacob."

Boston Children’s Hospital supports healthy, safe and controlled gaming. If you have questions or concerns about your child’s gaming, please visit www.cmch.tv/ or http://cmch.tv/parents/video‐games/ for resources on healthy gaming habits for kids.