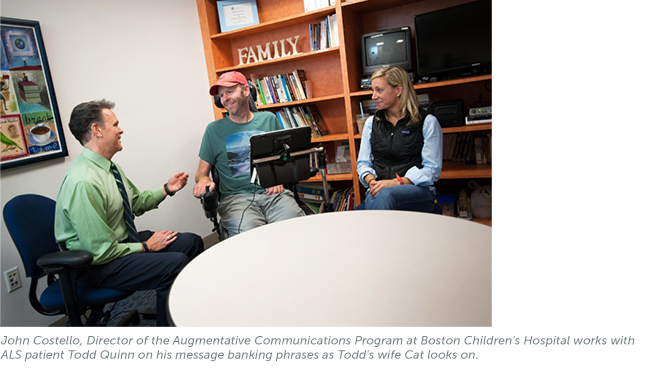 Boston, Dec. 8, 2015 /PRNewswire-USNewswire/ – The Augmentative Communication Program (ACP) at Boston Children's Hospital has received a $1.5 million gift to establish a program dedicated to improving the lives of adult patients with amyotrophic lateral sclerosis (ALS), a fatal and progressive neurodegenerative disease with no known treatment. This unique program will promote the development and adoption of comprehensive and proactive technologies, including "message banking," which will allow people with ALS to continue to communicate in their own voice. This ability enables ALS patients to maintain critical connectedness with family and friends as the disease progresses.

The initial gift creating this program was made by Travelers Chairman Jay Fishman and his wife, Randy. Fishman recently announced that he has been diagnosed with ALS. Travelers employees and individual Board members have voluntarily come together to raise more than $500,000 to support this important program. Other initial donors include The ALS Association, JPMorgan Chase and Jamie and Judy Dimon, Loews Corporation and James and Merryl Tisch, Stone Point Capital, Charlie and Amy Scharf, Wasserman Media Group, American Financial Group, Bob and Martha Lipp and Team Gleason.

These contributions, which total nearly $4 million, represent a substantial kickoff of an effort to raise $10 million for the permanent endowment of the program. John Costello, MA, CCC-SLP will be the ACP director.

"This program will give newly diagnosed patients control over one particularly frightening outcome of the disease and will provide them with the ability to do something for themselves and their families," said Fishman. "My family and I are so moved by John's passion and dedication to this. The support shown by Travelers employees is not something that surprises me – it's how our company is, and I'm incredibly grateful for their generosity."

A focus on compassionate care and quality of life

Roughly 30,000 people in the United States currently live with ALS, in which the motor nerve cells of the brain and spinal cord (which signal muscles to contract) slowly but progressively degenerate. Another 5,600 Americans are diagnosed each year. Over time – sometimes fast, sometimes slow – ALS robs people of the ability to move and speak.

"We can't change someone's medical diagnosis," said Costello. "But we can help them maintain dignity, control and social connectedness while expressing their true selves and remaining active members of the world around them. After all, communication is the thread that connects us all."

Banking for the future

With message banking, a patient with ALS records and curates (or "banks") words and phrases – including those that may be unique to him or her and that hold special meaning to family and friends – before losing their speech. Specialists load those high-fidelity digital recordings into assistive devices that allow the patient to select and play the messages at will, giving them the power to speak to those around them through recordings of their natural voice.

In addition to offering message banking as a clinical service to adults with ALS, the ACP at Boston Children's Hospital will offer comprehensive augmentative communication services to people with ALS at all stages of the disease, offering low-tech and no-tech options to individuals who cannot take advantage of message banking. ACP also offers assistive technology solutions which allow people to use their computer to work and control their home environment.

"If you could not speak and you want to say to someone, 'I'm thirsty,' a computer-generated synthetic voice is fine. If, however, you want to tell your child, 'I'm so proud of you,' you want it to come from you in your own voice," Costello said. "I am thrilled that we can now expand the number of people with ALS who can take advantage of this incredible technology."

Born out of pediatric innovation

A speech pathologist by training, Costello has been working in the field of augmentative communication for more than three decades, helping children with disabilities that affect their ability to speak. He has employed and refined message banking technology with his patients for 25 years, initially as a means of helping children communicate during the immediate recovery period after major surgery.

"An intensive care nurse came to our program, noting that children in the intensive care unit who are on a ventilator or other forms of breathing support are unable to speak, sometimes for weeks at a time, and that this was very distressing for both children and families," Costello recalled. "She wondered if there was anything we could do."

That request evolved into an informal inpatient service through which a child scheduled for major surgery meets with ACP speech pathologists to bank messages before surgery. The team then loads the recordings into devices that allow children to select and play their banked messages.

"I had no idea message banking was going to be as powerful as it was for these inpatient families," Costello said. "Hearing their child 'speak' in their own voice helps families maintain a connection with their children. Our medical staff has said it gives them a completely different sense of who their patients are. And patients have repeatedly told us how special it is to be able to communicate like this post-operatively."

After giving a presentation about message banking in 2009, Costello was approached by caregivers working with ALS patients, asking if he would be interested in employing the technique with adult patients with ALS. He and his colleagues now informally serve 50 patients with ALS each year, seeing them as soon as possible after diagnosis to introduce proactive strategies including banking their voices before their condition progresses too far. ACP then matches patients to the voice technologies that best fit their needs as time goes on. The endowment fund being created will allow Boston Children's Hospital to formalize the program and make it available to many more patients on an ongoing basis. In addition, it will enable ALS clinics across the country to be trained on how to perform this work.

"We've had amazing support from Boston Children's all along," Costello said. "What we've done to date has grown out of the strength of our otolaryngology and communication enhancement team and the whole institution. We are both grateful for and humbled by the generosity shown by all the initial donors, and are excited to see this program grow and help as many people as possible."

While these contributions have helped make this program a reality, ACP needs additional funding to ensure that it can continue to reach as many patients as possible and provide a comprehensive augmentative communication service to all of our patients throughout the course of their lives with ALS.

To learn more about the program or to make a contribution, please visit childrenshospital.org/als. 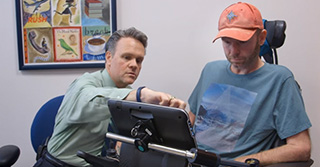 Helping give a voice to people with ALS

Stay connected with us

Sign up for eNews to find out the latest news, events, and announcements for Boston Children's Hospital.

Browse through our archive for a full list of Boston Children’s Hospital Trust news stories.

You will bring children cutting-edge care and life-changing treatments they can’t receive anywhere else.